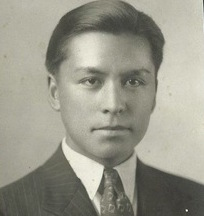 The Rev. Canon Stanley Cuthand died at 4:30 a.m. Monday May 23 at St. Paul's Hospital, Saskatoon, after a brief illness. He was 97 years old. A memorial service will take place Wednesday, May 25 at 2 pm at McKeague Funeral Home, Acadia and 8th Street, Saskatoon. The wake will begin on May 26 at Little Pine First Nation school gym and the funeral will be at 2 p.m. on Friday May 27, also at the school gym. There will be a feast to follow. Stan was the oldest member of the Little Pine First Nation.

Stan graduated from Emmanuel College, Saskatoon in 1944. He was ordained deacon in 1944 and priest in 1945 by the Bishop of Saskatchewan. He and Chris were married in 1944. Stan initially served at Lac La Ronge with Stanley Mission and Pelican Narrows. From 1950 to 1955 he served at Mount Nebo in the Diocese of Saskatchewan returning to Lac La Ronge from 1955 to 1959. He was recruited by Bishop George Calvert of Calgary to serve the large parish of St. Paul's Cardston and Blood Reserve with All Saints, Waterton (1959-1967). He was Regional Dean of Lethbridge. He then served in the Diocese of Qu'Appelle at Rector of Touchwood Hills.

Stan was a gifted teacher who wrote many scholarly papers. He was a visiting professor at the University of Calgary and the University of Regina, later becoming an Associate Professor and Department Head at the University of Manitoba. His son Doug recalls how Stan taught several people who became distinguished leaders. Doug mentioned Mr. Justice Murray Sinclair (now a Senator), Ovide Mercredi and Phil Fontaine among others.

Stan retired in 1998 as Associate Professor at the Saskatchewan Indian Federated College (now the First Nations University of Canada). He was named one of 100 influential alumni of the University of Saskatchewan on the occasion of the university’s 100th anniversary.

Stan spent twenty five years translating the Bible into Cree. He was honored by his partner in that project, the Canadian Bible Society. He received an Honorary Doctor of Divinity degree from St. Andrew's College, Saskatoon and an Honorary Doctor of Laws and Logic (LL.D.) from the University of Regina. He was an Honorary Fellow of the College of Emmanuel and St. Chad and was named a Canon of the Diocese of Saskatoon by Bishop Rodney Andrews.

The Cuthands retired to Saskatoon where they were active in St. Timothy's Parish, then St. Matthew's Church where Stan was an Honorary Assistant.

Stan was predeceased by his wife Chris and grandson Chris. He is survived by four children, Doug, Beth, Ruth and John and several grandchildren and great grandchildren.

His humour, wisdom and deep spirituality will be greatly missed.

May he rest in peace and rise in glory.